THE Gajogo FAMILY OF COMPANIES 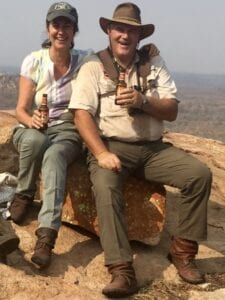 Gary and JoDee Goltz (GaJoGo) were married in 1986 and raised their two sons in remote northern Minnesota which is still home.  Gary was a fighter pilot and airline pilot.  JoDee was also in the military; both retired. The concept of Gajogo Safarilands started in 2001 and became a reality in 2008 after completing the complex arrangement of obtaining the lease for Coutada 9 with Mozambique.

The rest is all history and it is what this entire website is all about.  Thank you for considering Gajogo Safarilands.  We sell adventure.  Come as clients, leave as friends.   We are America's Safari operator.

The Gajogo Foundation was established in 2013 as an IRS tax exempt 501(c)3 not-for-profit public charity corporation with the intent to primarily provide benefit for the African Country of Mozambique.

The Gajogo Foundation does not have a paid staff, paid directors, nor paid officers. All work is done on a volunteer basis as established by bylaws...most work is done by the Gajogo Safarilands companies. Virtually 100% of all donations go directly into the selected projects for which they were attended. Bank costs, certified public accountant fees, legal, and minimal business expenses are the Foundation's only expenses. Please select a tab below to learn more about specific details on potential projects to which you can donate, receiving major tax benefits, and help rebuild this extremely beautiful wild desolate place on the Dark Continent to it's legendary origins.

As the Wuhan Coronavirus affects us all, real world life continues on the Dark Continent. Gajogo is there. Everyday fighting to save lives, not with ventilators, not with masks, but with Anti-poaching teams. Gajogo Safarilands was "Conceived in Minnesota; Born in Mozambique" bringing the best of both worlds.

And now as dollars dwindle because of the Wuhan Virus affects on safaris, the Gajogo Foundation is seeking to bolster Anti-Poaching dollars so the operators in Coutada 9 can continue to save lives.  As “America's Safari Company,” Gajogo provides State-of-the-Art Conservation "best practices" through Anti-poaching, Capture and Relocation projects, Research, Education, Native people's welfare, and intelligent hunting.  Help the Coutada 9 safari operators remain the Guardians of Desolate places.  Donate to the Gajogo Foundation.

The Foundation will develop and implement programs or projects that assist indigenous people in attaining a higher quality of life through providing:

2) Hands-on collaborative efforts with indigenous peoples to build schools, clinics, churches, water wells and other facilities that are deemed necessary in accomplishing the intent of the Foundation.

To Donate:  1)Write a check to the Gajogo Foundation and snail mail it to our address below;  or, 2)contact us to direct deposit into the Foundation's Wells Fargo Account;  or, 3)book any safari, and receive up to 33% tax deductible credit from your Daily Rate;  or, 4)contact us regarding donation of vehicles, land, or virtually anything of value.  You will receive receipt of your fully deductible gift to the Gajogo Foundation at your snail mail address in compliance with IRS requirements.  Thank you in advance.

•PRESIDENT/CEO: Gary Goltz. Gary is the Founder and continues to lead the Gajogo Foundation towards its Mission Statements as developments play out in Mozambique. Typically Gary and his wife JoDee are "on the ground" for about 6 months a year in Mozambique. While there, numerous events involving Local and Federal governments to include visits to Coutada 9 by dignitaries, working with local governments, villages, chiefs, and the people are continuously handled by Gary and the staff at Gajogo Safarilands Mozambique, Lda. Gary has a BS Degree in Recreational (Natural) Resources Management from the University of Minnesota.
•EXECUTIVE VICE PRESIDENT: Trapper Goltz. Adult son of Gary and JoDee, Trapper Goltz brings several years of working on the ground in Coutada 9. His job is to assist the President, and stand in for the President when necessary. Trapper has a BS Degree in Wildlife & Aviation from the University of Minnesota.
•TREASURER/CFO: Sven Lindquist. Currently President of Safari Club International (SCI), Sven brings years of wildlife organizational skills to the Foundation. Because of the potential for conflict of interest with SCI, Sven is currently on official hiatus as the CFO. The Foundation looks forward to his return.
•SECRETARY: James Anthony. Pastor (LCMS) Anthony brings with him years of theological training and provides great assistance in the Humanitarian efforts of the Foundation. Africa is currently experiencing the greatest growth in Christianity in the world. From dealing with Witch Doctors to other occult issues, Pastor Anthony has a great deal to offer the Foundation.
•MEMBER: Armand Brachman. Extremely successful business man and entrepreneur, Armand brings world wide business sense to the Foundation. He is also an avid big game hunter to include Africa and Mozambique.
•MEMBER: Bill Dittmer. Air Force fighter pilot and farmer from North Dakota, Bill brings farm sense to the Foundation with a Master's degree in Genetics, his knowledge helps guide the research studies currently underway in Coutada 9. He is also an avid big game hunter to include Africa and Mozambique.

SOME OF THE GAJOGO FOUNDATIONS PROJECTS TO DATE

Still in Progress, 250 Buffalo have been captured, trucked, and released into fence-less Coutada 9 from the Marromeu region on the Zambezi River Delta.  The cost: $300,000.

In bad need of repair, several school have had new sidewalks built, fences erected, and windows/doors repaired.  In addition, new construction of schools, clinics, etc. have also received assistance.  The Gajogo Foundation also provides school supplies and meat for the students and teachers.

To date 2 anti-poaching vehicles, 16 pair of handcuffs, gun cleaning equipment, and lots of meat have been donated to the Police and families in the villages. Plans to build a new Police station are underway.

Launched in the fall of 2019 by Coutada 9 biologist on staff, collars have been placed upon Lion and Cape Buffalo an effort to discover how there populations are flourishing, poaching morbidity, and where (including how far) they travel away from the protections afforded by anti-poaching only in Coutada 9.  All research is approved and compliments other studies already underway in Mozambique.

GSM is further required to conduct Anti-poaching operations (law enforcement), assist in all matters of land usage affecting natives, provide projects to assist natives, and re-establish the legacy of Coutada 9 as the thriving Official Game Preserve No 9, and Big Game Hunting area in central Mozambique.

Lastly, GSM is to Mozambique as GS is to the USA.  It represents Coutada 9 on all fronts; Government meetings, anti-poaching, public forums, membership into the Mozambique Outfitters Association, and meetings and festivals with locals peoples.

As the marketing arm, the public view, and the face of the GS companies, it provides funding for Sports shows, international business meetings with USFWS, Mozambique's ANAC,  Customs and duty on imports from Moz, and in general keeps all legal requirements for operations on the radar in the USA and Mozambique.

Funded privately, and through safari sales, GSL insures sufficient funding is available in Mozambique to meet the requirements of both GS companies.  Once funding is in place in Mozambique, it cannot be drawn back and becomes the operational asset to GSM.  Thank you to all who have helped the Gajogo Family of companies become a significant success for wildlife, the natives, and the environment in Coutada 9.